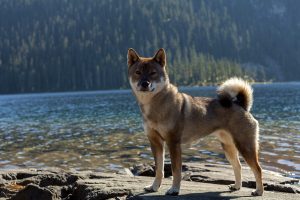 If timing would have been slightly different Yuki would have been my first export to Japan. Yuki was a producer of fine offspring and had a very successful career including World Junior Champion in 2011.  Shortly after retiring Yuki managed to free herself from her lead and spent 10 days wondering Burns Bog in Richmond including a crossing of the Fraser river going over via the Alex Fraser bridge until she was reunited with her foster family.  All’s well that ends well!.