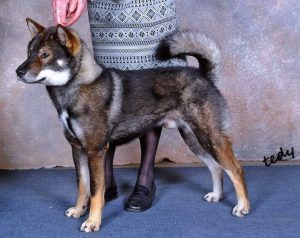 Shiggy’s road to Canadian Grand Champion had a number of twists and turns.  Originally he was to join a family in Australia. This was not to be as travel and quarantine costs proved prohibitive so Shiggy joined a family here in Courtenay where he proved himself somewhat of a break out artist which was exasperated by family members having a tendency to let him out of the house which he used to best advantage to roam and explore the neighborhood.  This ultimately lead to tragedy when he was hit by a car and laid unconscious in a ditch for over 12 hours with a broken hind leg and a punctured lung.

At this point Katja bought Shiggy back more out of concern for Shiggy than an intent to pursue his show career.  This proved to be a very good development for both Shiggy and Katja.  With an easy going attitude, a tolerance to other dogs and a outgoing personality Shiggy quickly progressed in his career and sired several fine examples of the breed.